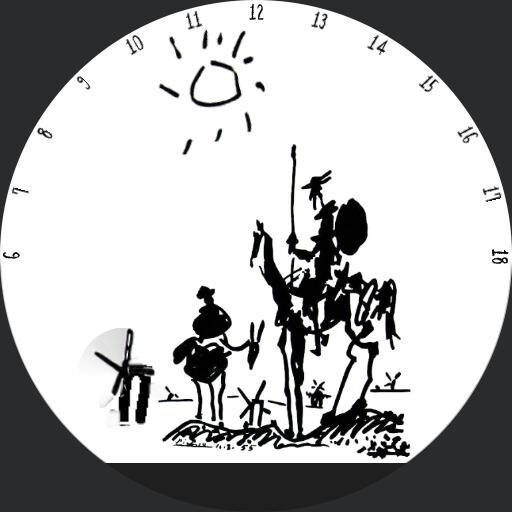 Update: I'm finally getting around to fixing a problem with the dim in this watchface where the top would go black. Should be fixed now.

I was a Pebble Kickstarter supporter. Early on, a user going by davidSncho posted my favorite face for the Pebble based on Picasso's Man of La Mancha drawing. Unfortunately, the face was never updated past its initial release and became incompatible with later builds of the Pebble software and so I couldn't use the face anymore.

This is my shot at reviving that Pebble classic for Moto360. The Sun and Moon in the sky show the hours (24) and the windmill in the lower left shows minutes. The windmill can be a little difficult to read, and the best, least obtrusive thing I've been able to figure out is to use the "radar" effect to better lead the eye to the correct blade of the windmill.

It is not the most precise way of telling time, but I've gotten pretty good with practice. Nevertheless, I thought it might be better to post in time for a weekend where (hopefully) people don't have to time things to the minute!