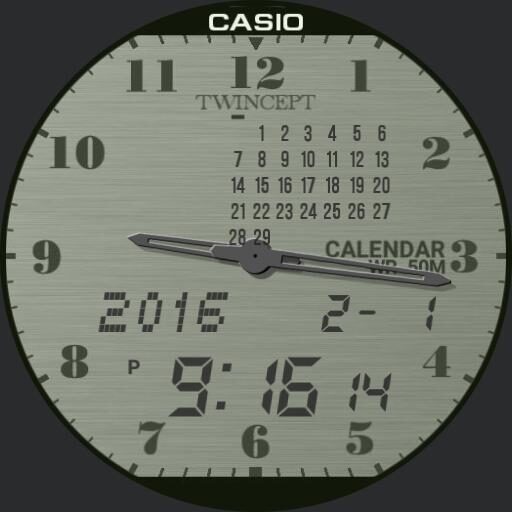 Change Log
-----------
v1.57b Fixed bug, the "31" under the column 3/10/17/24 did not display when it should, under certain circumstances.
v1.56b Fixed bug, when viewing previous months in perpetual calendar, any month that should start on Sunday would instead display as starting on Saturday. Going back one more month and then forward again would display the correct starting day for the same month.
Changed the color of hands, dial marks and numbers to dark blue. If this change isn't well received, I will release a separate version with the original flat gray hands and dial.
Reduced the font-size of the calendar by one point.
Effective this release, only the parallax or 3d version will be maintained. If you would like to have the non-3d version, remove the "sax*x.x" and say*x.x" codes from the position x and y axis in the various layers, as well as the "offset" in the y-axis (currently 20).
+
v1.55b Added highlights and lowlights to numbers and marks on dial. This increased the download size a bit due to the additional graphic layers needed tor the effect.
v1.54b Fixed bug in TIME/DATE/CAL screen where month and calendar don't update at midnight on the last day of the month until changing to a different screen.
Replaced hands with ones that are copied from my original Twincept watch.
Added a slight yellow filter to cut some of the blue from the screen when viewed at night.
Description
-----------
Special Parallax release of my Casio Twincept (LCD over Analog) Tribute watchface.
This face has all of the features of the main release of the Twincept watchface, plus the background and hands have accelerometer induced shifting that gives the effect of parallax, where the LCD display stays fixed to the image and the lower layers shift underneath based the "X" and "Y" accelerometer sensors.
The Y-axis has been shifted so the normal wrist-mounted position for viewing the watch looks normal. This causes the hands and background to appear abnormally shifted down if the watch is laying flat/horizontal. 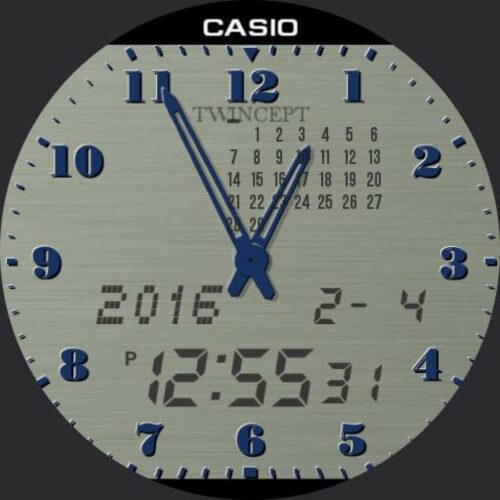